← more from
Intakt Records
Get fresh music recommendations delivered to your inbox every Friday.
We've updated our Terms of Use. You can review the changes here. 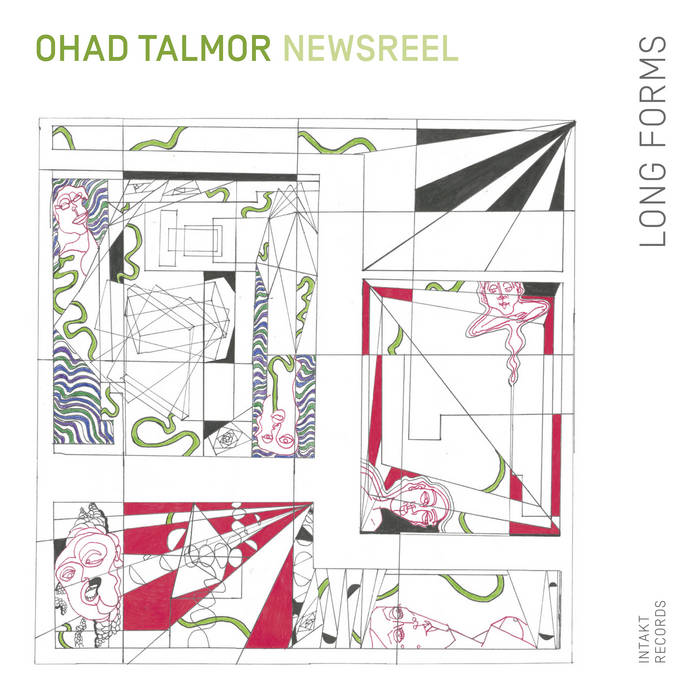 Intakt CD 341
Long Forms, Ohad Talmor's Newsreel Sextet album brings together the various influences that populate Talmor's music universe into one coherent project.
The music focuses on long form compositions with each piece based on a single idea which seeks to develop continuously, while giving improvisers the dedicated space to explore and connect the written abstract with their personal voice.
With the exception of the miniature Groupings, a short canon, the identity of each tune is anchored in different traditions.
The album opener; Layas Lines, is based on the third movement of Talmor’s Piano and Drums Concerto LAYAS, written for pianist Jason Moran and Newsreel drummer Dan Weiss. Layas Lines and Kayeda are both based on the Hindustani heritage (North Indian classical Music), especially in the use of its rhythms (a Kayeda is a specific type of tabla composition). These 2 pieces echo Talmor’s ongoing practice of the bansuri, Indian bamboo flute and his study of Ragas.
Casado is the simplest and most straight forward composition featured on this album. Centered around a descending diatonic idea, it gradually moves out of the improvisation into a three voices counterpoint highlighting the polytonal harmonies.
Scent, with its more delicate melodic movements, shifts between moment of stasis and intense activity. The three-part form explores the idea of resonance. The middle improvised section features the whole 6tet following a solo piano interlude.
The album closes with Musique Anodine, its longest track. The 401 measure long form is spun out of a simple 8 measure diatonic movement which expands exponentially - a process oriented method applied throughout the piece. This episodic composition features improvisations from all members of the Sextet interspersed in between orchestral sections. The gradual, full form crescendo, leads to a final theme, more lyrical in character, bringing the album to a fitting end.


O﻿had Talmor came to New York in 1995 to study music and since then made Brooklyn his home where he has been one of the "movers and shakers" of the creative jazz scene. He can be heard playing with or composing for musicians such as Lee Konitz, Steve Swallow, Kurt Rosenwinkel Adam Nussbaum or Jason Moran.
Talmor, the cosmopolitan who today commutes between Europe and New York, is an outstanding improviser and expressive stylist. In recent years, he has attracted widespread attention with the originality of his compositions and sophisticated arrangements, whether in his trio, sextet or orchestra.
The core members of Newsreel Sextet are Talmor's long-term fellow travelers: Jacob Sacks (p), Miles Okazaki (g), Shane Endsley (tp), Matt Pavolka (b) and Dan Weiss (dr), some of whom he first met at the Manhattan School of Music where he studied Composition in 1995 – fresh off the boat. Ohad Talmor: "The members of my band are friends, with whom I share a great artistic trust and bond. That's the personal side, which is very important to me. Just as important is the musical side. Each one of these musicians is a strong artistic personality, able to play the music convincingly – it's by no means easy and moves seamlessly between various genres: jazz, North Indian traditional and contemporary or New music."
Talmor's voice as a composer and improviser is unique. It offers a powerful and prismatic music which dances between rousing passages to lyrical and poetic ones, seamlessly integrated into different musical forms. – A great adventure for the listeners.

Ohad Talmor is a cosmopolitan saxophonist-composer-arranger based in NY.
Mentored by the legendary Lee Konitz, Talmor has collaborated with a who's who of the Jazz world including Michael Brecker, Joshua Redman, Steve Swallow, Billy Hart. He has written music for a wide array of ensembles, including the WDR Orchestra and a Double Concerto for Piano/Drums and Orchestra w pianist Jason Moran ... more

Bandcamp Daily  your guide to the world of Bandcamp

Frayle's Gwyn Strang and Sean Bilovecky join the show to talk about their cathartic new album.